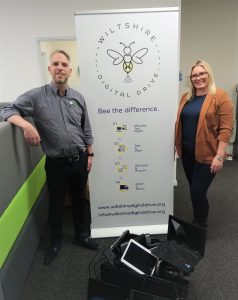 Volunteers and staff at Wiltshire Digital Drive are celebrating as they reach an important milestone in their aim to bridge the digital divide across the county.

Since January this year 1,000 school children, families and organisations have now been given a laptop or computer, bringing the total number of people supported to 1,254 since May 2020.

Natalie Sherman, co-director of Wiltshire Digital Drive, said: “I can’t believe we’ve got to this milestone already, and for 1,000 of those devices to be redistributed in just one year is incredible. It really is down to everyone’s generosity with donating their devices and time- we can’t thank you enough.

“But it doesn’t stop here, there are still so many people that need our help and we’ve already got our sights set on the next goal.”

The 1,000th device was allocated to St Joseph’s Catholic School in Salisbury. Headteacher, Mrs Rachel Ridley, said: “This is the second time that we have been able to use the invaluable services of Wiltshire Digital Drive; the first time was during the lockdown last year between January and March where we were able to distribute five laptops to some of our families who otherwise would not have had suitable devices to do their home learning.

“Now, these six micro PCs will be especially useful for some of our more vulnerable pupils as they will now be able to access their learning outside of the classroom with minimum disruption. We are extremely grateful for the devices that Wiltshire Digital Drive have been able to provide our school community and delighted to have been in receipt of the 1,000th device!”

Wiltshire Digital Drive was born from the success of a laptop recycling initiative set up during the first lockdown by Westbury- based IT company Priority IT. Kieran Thomas, founder of Priority IT and co-director of Wiltshire Digital Drive, noticed that many school children were having trouble learning at home due to lack of access to a device. “Having my own children home schooling during this time made me realise that many families were in the same position but either had to share the device with other family members or didn’t have the access to the technology at all.

“It also quickly became apparent that community groups and charities have also been forced to change the way they work and interact differently with the people they support. So, to hit this milestone and help that many people is just amazing.”

Donations of devices are always welcome, and they can be taken to any of the donation points across the county: https://www.wiltshiredigitaldrive.org/drop-off-locations/.

If people want to get involved, but don’t have a device to offer, fundraising is still being sought via a Go Fund Me page which helps with the refurbishment costs www.gofundme.com/f/the-wiltshire-digital-drive.

Companies upgrading technology can also donate any unwanted devices and become part of the Business Hive. More information on this, plus how to apply for a device can be found on the website www.wilthisredigitaldrive.org

Volunteers and staff at Wiltshire Digital Drive are celebrating as they reach an important milestone in their aim to bridge the digital divide across the county. Since January this year 1,000 school children, [...]

The digital divide in the Corsham area is being reduced thanks to funding from the local area board. £5,000 has been granted by Corsham Area Board to the Community Interest Company (CIC), Wiltshire [...]

More South West Wiltshire community groups, schools and charities will be able to get online thanks to local funding. Community Interest Company, Wiltshire Digital Drive has been helping bridge the digital divide across [...]