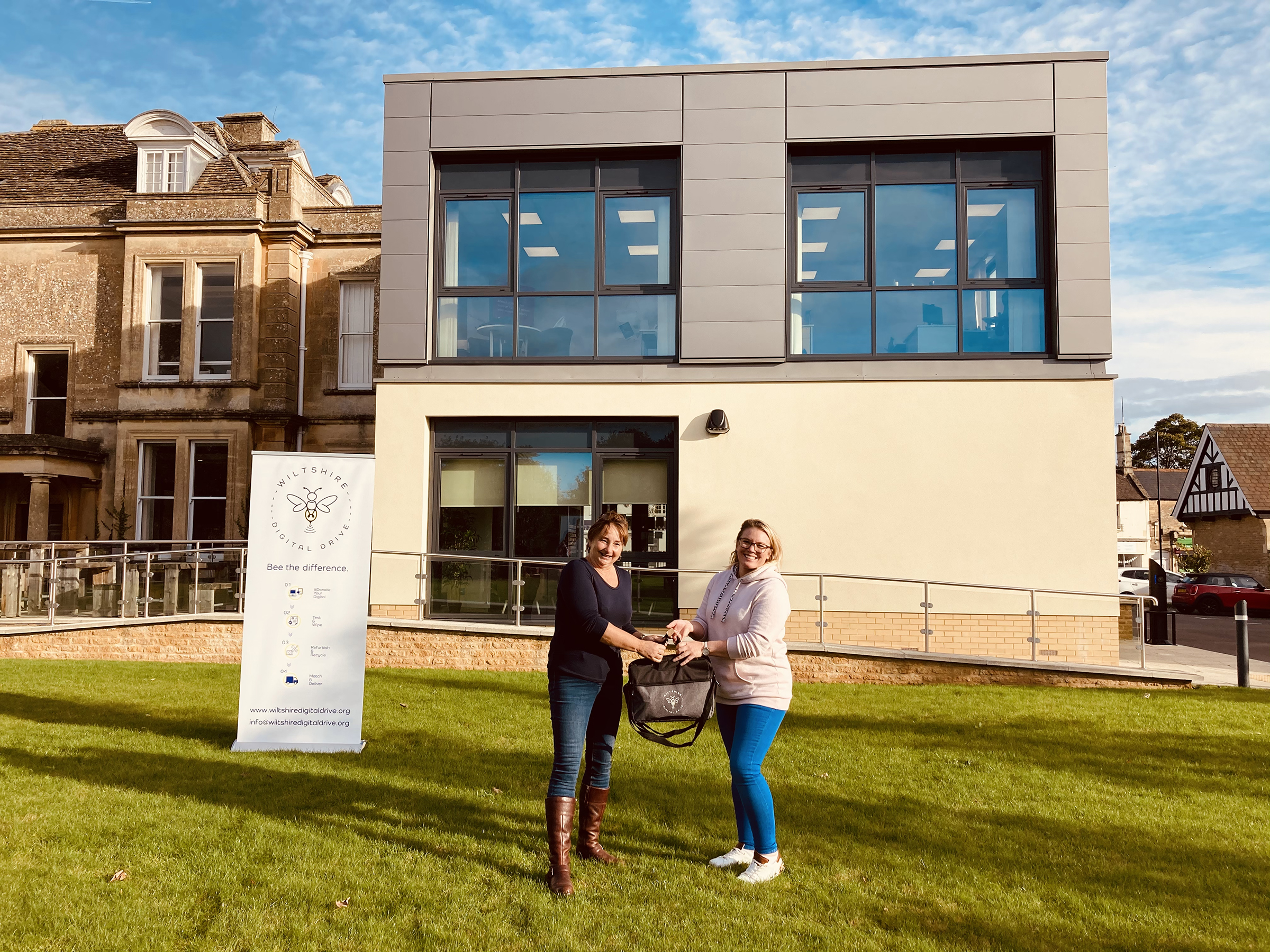 Wiltshire Digital Drive (or WDD as its affectionately known) is a non-profit CIC (Community-Interest-Company) based in Wiltshire. Our goal is to bridge the digital divide within the county and enable the community to access education and learning, and to reduce social isolation. We haven’t been around for too long, but in our time, we’ve achieved quite a lot!

Our story began back in April 2020, when Priority IT launched their ‘laptops for home schoolers’ initiative. They took in unwanted laptops and had them refurbished before redistributing them to families who were home-schooling during the lockdown and were unable to afford or access a laptop.

The team over at Naturally Social headed up the campaign and the first donations arrived within two weeks! 155 machines in total were refurbished between May and September 2020.

Following the success of the campaign, Wiltshire Digital Drive was formed In October 2020, to ensure the campaign’s impact could continue.

It didn’t take long for our mission to get noticed, as we caught the attention of the BBC and became their partner under the BBC’s Make A Difference scheme. This partnership, during lockdown number three, resulted in over 2000 donated devices within three weeks!

We soon realised that school children were not the only ones in need of help as charities and various community groups were working with some of the most vulnerable adults in the county, where connectivity was going to play a vital part in their health and wellbeing during the pandemic.

The Wiltshire Women Empowerment Program is one of the charities we have been able to distribute devices to, to support their initiative to empower women and female-headed families.

In 2021 we held two events at the Digital Mansion, our donation station in Corsham. Our first was a volunteer event hosting around 45 attendees, to thank them for their commitment and continued support.

A few months later, we hosted a corporate event, to thank our corporate supporters and help other organisations learn about who we are, what we do and how they could help us.

Good To Be Recognised:

While we’re celebrating companies and individuals who have been supporting us, we’ve also been on the receiving end of a lot of positive attention.

In 2020, we won the Best Use of Social Media category in the Reward: Recognising Charities & Non-Profits award ceremony.

In 2021, we won the award for Covid Community Champion at the Southwest Business & Community Awards.

We’ve also been finalists for other awards, including the Mission Possible category at the Small Awards and the Global Good Awards.

We continue to receive invaluable support from the National Lottery which has approved our grant applications and awarded funds worth over £150,000 to ensure our work can continue.

Receiving nearly 6000 devices in donations is not the only impressive statistic we have been able to reach! We have managed to, in turn, re-distribute over 1500 devices across the county!

Working to a zero-landfill policy, our recycling efforts have managed to prevent over 6.5 tonnes of technology from going into landfill!

One in five schools in Wiltshire have been helped by our efforts. This includes Kings Lodge Primary School in Chippenham, St Joseph’s Catholic School in Malmsbury, and Westbury Leigh Primary School.

We were also involved in recent efforts to support Ukrainian refugees who have been rehomed in Wiltshire. We have been able to send 70 Chromebooks to The Harbour Project, and a further 50 to Swindon Borough Council, with all 120 devices to be gifted to the Ukrainian refugees to help them contact friends and family back home and access any needed services.

We were even able to launch our own awareness day earlier this year and we called it: Donate Your Digital Day!

DYDD took place on January 7th 2022, and was well-received, with many donations delivered to our donation stations across the county. Anyone who wanted to support the event but had no devices to donate could still do so via our GoFundMe page. The money raised here goes directly towards the costs of refurbishing the donated technology. Over 1000 devices were donated, in just a single day – What an incredible achievement!

Our story may be shorter than many, but what we’ve been able to achieve in this time is nothing short of amazing!

If you were inspired by our story and want to get involved, you can find a list of all our donation stations here.

If you don’t have any technology to donate, that’s ok! You can still support us by sharing our story, joining our Facebook group, interacting with our social media posts or contributing financially. It costs just £30 to refurbish a laptop and our crowdfunding page is still accepting donations.

Thanks for reading, and don’t forget to #DonateYourDigital!

Over 100 laptops gifted to Ukrainian families

Ukrainian families due to be rehomed here in Wiltshire will be given access to technology, thanks to a generous donation by a local company. Wiltshire Digital Drive, set up to refurbish and re-distribute second-hand [...]

Wiltshire Digital Drive is celebrating today after being awarded £135,000 in funding from The National Lottery Community Fund, the largest funder of community activity in the UK. The non-profit organisation, established in October [...]